South Africa’s bottled water industry, the third largest player in South Africa’s non-alcoholic beverage industry yet accounting for only 8.9% of the market, does not exacerbate the impact of the drought currently gripping several areas of the country, including the Western Cape.

This is the message from South African National Bottled Water Association (SANBWA), which answered ‘No’ when directly asked ‘Is the bottled water industry exacerbating the drought?’

• Small volumes compared to the production of the market leaders, daily water consumption
According to BMI 2015 figures, carbonated soft drinks still head the non-alcoholic packaged beverage field with a phenomenal 69.3% of the market.

In second position is ready-to-drink fruit juices at 11.8% and the bottled water industry at 8.9%. The 8.9% includes flavoured and functional waters, which makes the packaged water stakes even smaller.

Further, a presentation by BMI at Propak Cape during October 2017 put the total size of the bottled water industry for 2016 at 502-million litres. This annual figure is dwarfed by the daily 520-million litres daily target consumption for the City of Cape Town, said Metcalf.

Bottled water – which is defined in South Africa as ‘water packaged for human consumption’ and it is therefore classified as a foodstuff and overseen by the Department of Health whereas municipal or ‘tap water’ is classed as ‘drinking water’ and therefore needs to comply with public water supply regulations – doesn’t compete with tap water for share of throat.

Instead, its competitors are other products in the non-alcoholic packaged beverage category such fruit juices and carbonated soft drinks as well as dilutables (which had 3.7% of the market in 2015), energy drinks (2.8%), mageu (1.7%), sports drinks (1.1%) and iced teas (0.9%).

• Use of independent water sources
More than 90% of packaged waters in South Africa are either natural water or water defined by origin. This means that 90% of the industry is water sourced from underground sustainable sources or springs. SANBWA members’ sources are independent of other water users, thus the impact on South Africa’s ground water resource is nil.

Since no water from any of these sources enters the municipal system, the fact that these sources are used for bottled water has no impact at all on the amount of water South Africa’s municipalities and Government departments have available to distribute.

SANBWA members are required to formally address and maintain a hydrogeological report, source vulnerability and sustainability report. This ensures that the source yield is never exceeded or overpumped. Another legal requirement is to adhere to water extraction limits provided by a license from the department of water affairs.

Additionally, SANBWA’s members, which represent about 80% of the total industry, all subscribe to SANBWA’s environmental policy. This covers four critical areas:
• Water. Ensuring effective water management from source to shelf, including requirements for source protection, efficient water usage and responsible effluent practices.
• Solid waste: Reducing, re-using, recycling all solids involved in the production and distribution of their products.
• Energy: Promoting the efficient use of energy and fuels.
• Post-distribution recycling: Supporting municipal and consumer initiatives for recycling packaging and bottles.

• Low water usage
Another point to bear in mind, according to Metcalf, is that the bottled water industry doesn’t have a large water footprint. This is a concept that evaluates the amount of water needed to produce an item of consumption. For example (excluding the packaging of these goods):
• the production of 1 kg of beef requires 16 000 litres of water
• the production of one cup of coffee needs 140 litres of water 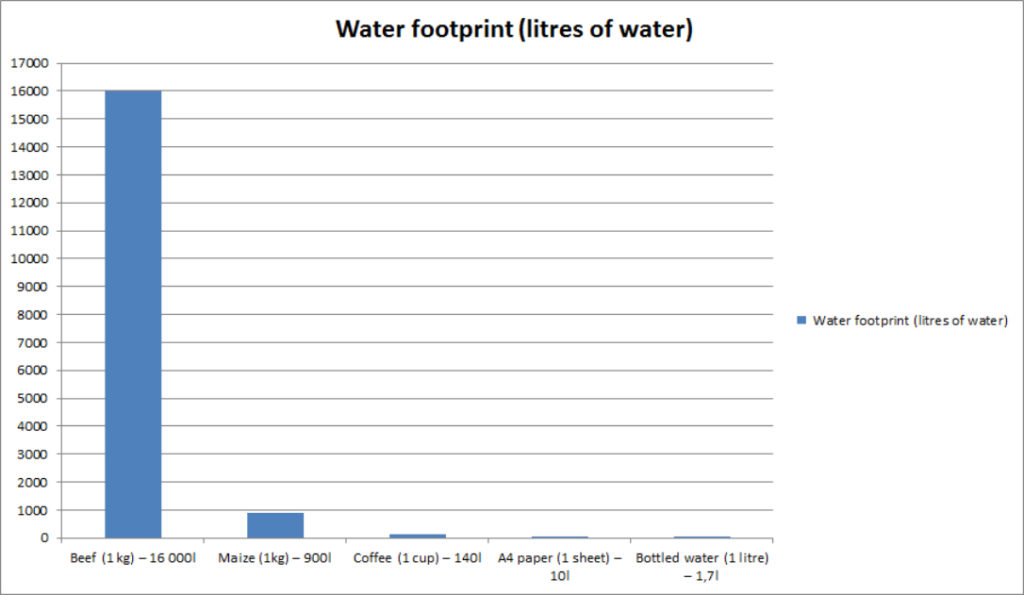 In South Africa, the water usage figure for bottled water plants is typically 1.6:1 for one-way packaging. This means that, for every litre of water bottled, 600 ml is used for the cleaning and sanitation of plant and equipment, flushing toilets etc. There are, however, plants that achieve ratios of as low as 1.2:1. Figures out of the United States show that there, on average, only 1.32 litres of water (including the litre of water consumed) is used.

The South African National Bottled Water Association (www.sanbwa.org.za) has two key objectives:
• to protect the conservation of all water resources wherever possible
• to promote the image and reputation of bottled water

It achieves the first by requiring members to adhere to its environmental vision. This includes measures to ensure source sustainability and protection, water usage and solid waste minimisation, energy efficiency, and post-consumer recycling initiatives.

The second is addressed through adherence to the SANBWA Bottled Water Standard, which covers legal, hygiene, food safety and quality, and environmental requirements. Members are audited annually to ensure compliance. www.sanbwa.org.za

All SANBWA member producers carry the SANBWA logo on their bottles. This acts as a seal of quality.

There are three main types of water – natural water, water defined by origin and prepared water.

1. Natural Water:
This is water of certain composition, obtained directly from a natural or drilled underground source, bottled near the source under hygienic conditions. Permitted treatment includes separation from unstable constituents (such as iron manganese, sulphur or arsenic) by means of filtration or decantation, without modifying the original mineral content of the water.

Approximately 70% of all bottled water in South Africa is natural water.

2. Water defined by origin (including spring and mineral water):
This is water from a specific environmental source such as a spring without passing a community water system. Treatment may not alter the essential physio-chemical characteristics or compromise the safety of the packaged water.

Mineral water is bottled water obtained direct from subterranean water-bearing strata, which contains mineral salts in various proportions, characterised by its mineral content of constant composition and temperature, taking into account natural cycles and fluctuations. It may be classified as a “natural water or as “water defined by origin”.

Approximately 20% of all bottled water in South Africa is water defined by origin.

3. Prepared Water:
This is water that has undergone antimicrobial treatment as well as treatment that alters the original physical or chemical properties of the water. Water bottled from a municipal source would be categorised as

Approximately 10% of all bottled water in South Africa is prepared water. It is safe water that is used for drinking – thus it does not disappear during production and unavailable for consumer thirst.

It is very important to understand that prepared water bottled by the water bottling industry is not the same as the water packaged by retailers in their stores or restauranteurs in their restaurants. These systems use the municipal supply as their water source.